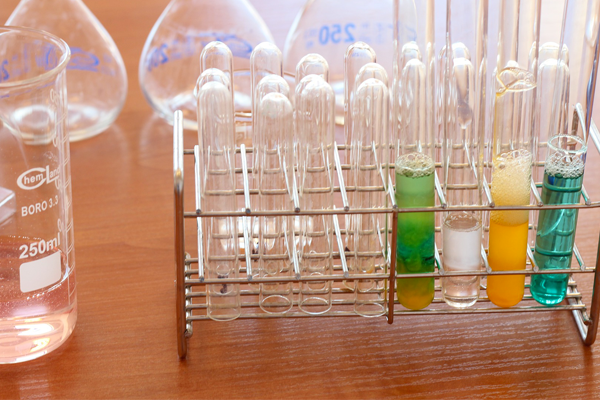 What’s in a battery, and why does it matter? In our current lives we are never far from batteries – the only way you can read this blog post is via a device that contains a battery – even a desktop computer contains a CMOS battery. The chemicals inside of a battery determine how long the battery lasts, if it can be recharged, the application for the battery, and so much more. Four common battery types are alkaline batteries, lead acid batteries, Li-ion batteries (Lithium ion), and NiMH (nickel–metal hydride) batteries.

The alkaline battery is the most common battery produced in the US – comprising 80% of the manufactured batteries in the United States. Alkaline batteries rely on the chemical reaction between zinc and manganese dioxide (Zn/MnO2) to produce energy. The creation of the first battery to use an alkaline chemical reaction was one of those scientific sparks that occurred almost simultaneously across the globe – with Thomas Edison and Waldemar Jungner recording their discoveries independently in two different hemispheres within 2 years of each other. The modern version of alkaline batteries was patented in the 1950s. The AA, AAA, and C batteries you are probably familiar with are examples of alkaline batteries.

Alkaline batteries are used in many household items such as MP3 players, CD players, digital cameras, pagers, toys, lights, and radios. They are typically not rechargeable, and attempts to recharge a standard alkaline AA/AAA/C battery in a NiCad charger is unsafe.

The lead acid battery is the oldest rechargeable battery. The reaction of lead and lead oxide with the sulfuric acid electrolyte produces a voltage. They are relatively cheap and can supply great amounts of power, making them a favorite for motor vehicle usage. Your car battery is most likely a lead acid battery. Lead acid batteries are also used for storing backup power in cell phone towers, hospitals and other power systems. Lead acid batteries can be recharged, but do not have an unlimited lifespan due to a process called sulfation, the crystallization of lead sulfate. Standard car batteries are susceptible to this process due to the battery being used for its surge power to start rather than a constant equal discharge.

Batteries that will be regularly discharged, such as electric cars, forklifts, and golf carts use deep cycle batteries that are designed to withstand frequent cycles. The best lifespan vs cost method for these types of batteries is to keep the average cycle at about 45% discharge.

Your phone and laptop may be powered by lithium-ion batteries. Li-ion batteries are rechargeable and produce energy by lithium ions moving from a negative electrode to a positive electrode, and are recharged when the ions move back from the positive to the negative electrode. Li-ion batteries are a fan favorite since they do not have much of a memory (they don’t forget what their full charge feels like), and they tend to not discharge very much when not in use. Lithium-ion batteries are growing in popularity for military, battery electric vehicle and aerospace applications.They are also becoming a common replacement for the lead–acid batteries that have been used historically for golf carts and utility vehicles. These batteries are not yet perfected, however – the electrodes that the lithium ions move between are flammable, and rapid charging or damage may cause fires or small explosions as Samsung learned with its Galaxy Note 7.

Nickel-metal hydride batteries are rechargeable, and are often used in digital cameras and other high-drain devices, where over the duration of a single-charge use they outperform primary (such as alkaline) batteries. NiMH cells have an alkaline electrolyte, usually potassium hydroxide. The positive electrode is nickel hydroxide, and the negative electrode is hydrogen ions, or protons. The hydrogen ions are stored in a metal-hydride structure that is the electrode. In 2008, more than two million hybrid cars worldwide were manufactured with NiMH batteries. NiMH are also now the popular replacement for powertool batteries that once relied on Nickel-Cadmium batteries.

No matter the application you need your battery for, Rapport, Inc. can help you get exactly the power you need for just the right price. Whether you’re looking for a few specialized batteries or several pallets of batteries, contact us today to get started.